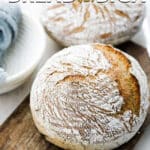 Elevate your bread making skills by making this Kamut flour bread recipe that uses an age-old Italian biga to make the lightest most delicious bread ever.

When it comes to bread making there are several techniques to use when needing your dough to rise.  I’ve shown you how to make a sourdough starter (levain) from scratch and then I’ve used in a Spelt Flour bread recipe and a Graham Flour rustic wheat bread recipe.  For this Kamut bread recipe, I’m going to be using something called a Biga which is an Italian pre-fermentation method to help break down the gluten and provide tons of delicious flavor.  Kamut is not gluten-free.

Preferments: The process of using a small amount of commercial yeast mixed with 30% to 80% of the total flour and water in the bread recipe and letting it rest from 10 to 24 hours to ferment.  It adds acidity, flavor and a shorter first rise when resting.

Kamut flour is a relative to modern-day wheat and seriously the most amazing flour to add to any baked good. Bob’s Red Mill Kamut is very finely ground and for comparison I would say it’s pretty dang close to an Italian 00 flour.  That’s right, Kamut flour is insane for making pasta and bread, which is why I used it in this recipe.

Kamut brand Khorasan wheat was said to be found in Egyptian tombs.  A man from the US received some of this wheat and eventually brought it back to the states where most of it is currently grown and harvested in the central north part of the US.

Biga is a common Italian pre-ferment where you take roughly 50% of the total flour and about 40% to 45% of the total water and mix it together with a very small amount of yeast.  You then cover it and let it sit at room temperature for 10 to 24 hours.  The longer a biga recipe sits, the more intense the flavor it provides.

A biga is usually good to go once it triples in size. It will have a slightly domed top to it and will have some air bubbles running through it once it is ready to be used.  Biga’s are commonly used in bread that is light and fluffy like focaccia and ciabatta. 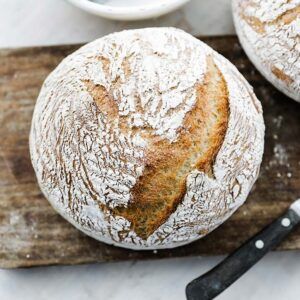