This Focaccia Bread is super light, fluffy, authentic and incredibly easy to make and is finished off with olive oil and rosemary. It’s been a minute since I’ve made this recipe.  I absolutely love focaccia and wonder why I don’t make more of it.  This bread is the perfect accompaniment to any meal and can be enhanced in so many ways with amazing toppings.

I’m sure you’ve had variations such as tomato or herb, whatever the case maybe it’s awesome.  Since you know I’m a traditionalist I’m going to stick with the way it was intended to be made and served.

Well, I can start by telling you what focaccia bread is not.  It’s not some 3” thick bread that is loaded up with a ton of toppings.  Nope, it’s not.

It’s about 1” thick, or less on some occasions, that is topped off with olive oil and either basil or rosemary.  It is a lightly leavened flatbread that comes together in about 3 hours, and I can promise you you’re going to love it.

One thing I can tell you, focaccia makes for insanely delicious sandwich bread!

Where Did Focaccia Come From

The bread we know today dates back a few thousand years, and while the basic recipe is thought to have originated from Greece, I’m going to have to tip my hat to the Italians here.

Focaccia is made all around Italy and absolutely loved by all while being mainly associated with the Ligurian region of Italy.  You may have heard it called focaccia Genoese; Guess what the capital of Liguria is?  Genoa!  Which is why they call it that.

Focaccia in Genoa is more accurately pronounced as Fugassa.  It was originally cooked in a fire burning hearth oven and can definitely be cooked in a regular oven nowadays.  The name comes from the word focus which means hearth or fireplace.

Today, Focaccia literally translates into flatbread, and by looking at it it’s easy to understand.  Honestly, it seems like it’s the gap between a plain flatbread and pizza! This is actually super easy to make and for all intents and purposes, we will be making a focaccia al Rosmarino or focaccia with rosemary.

You start by dissolving some yeast and water and then slowly add in some flour, salt, barley malt syrup (or honey), and olive oil.

Once the mixture is combined you then want to knead it until it becomes a light fluffy dough.

Next, let it rest for about 90 minutes or so, or until it has doubled in size. You then want to spread the bread dough recipe out on a sheet tray that has been brushed with olive oil and let it sit for about 30 minutes.  From there you want to use your finger and poke holes all over the top of it.  This is what gives it that focaccia bread texture.

To finish the focaccia bread you make something called a salamoia which translates to a, brine or pickling.  Not sure why they would call it this, but it’s a simple mixture of water, salt, and olive oil.

My only guess is that there are water and salt, and that is why it is referred to as a brine, but I can’t be for certain as my research came up short here.  Bake up your bread and scarf it down my friends! Focaccia bread can be served as an antipasto, as a side to pasta or as sandwich bread.  Yup, there are tons of uses for it and as I stated earlier you can have a lot of fun by putting on different ingredients before you bake it.

While I’m still loading up my bread recipe index, I’ve got a few below that you may like if you liked this bread recipe. 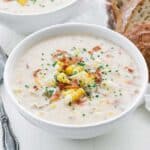