Zeppole Recipe is a classic Italian doughnut or dessert of simple fried dough that is coated and tossed in sugar and served up!

These are incredibly easy to make a treat that can be served up at breakfast or for dessert, just like  Struffoli or Pignolata.  This classic Italian treat is delicious and is sure to put smiles on faces!   They are pronounced as, zep-po-le and in this recipe I will show you how to make zeppole! What is a Zeppole?

They originated in Italy and were created to celebrate the festival of St. Joseph, which means you may have heard the name Zeppole di San Giuseppe.  While it’s really hard to pinpoint exactly how zeppoles were made, some folks believe they fried them in rendered fat or olive oil while others believed they were baked in a Napolitano style wood-burning oven.

Some of the stories for zeppole indicate if they were fried, they realized it was way too expensive to do it so that didn’t become popularized until the 19th or 20th century.  With all of this being said, I do feel like I was able to recreate a very authentic zeppole recipe based on what I already know.

If this zeppole recipe is truly from the 14th century then it would absolutely have been incredibly simple to make.  That means they would have most likely used a starter as opposed to a block of yeast or active yeast like we do nowadays.  Lastly, you will find quite a few variations of zeppoles to be served up with some sort of pastry cream or jam, or even with ricotta cheese. This zeppole recipe video is super easy to follow and will help be a great visual tutorial for making this recipe!

What Are They Made Of

Zeppoles in their simplest form are little fried dough balls that are coated in powdered sugar, nothing more.  They are a softer pizza or bread dough and firm up once fried.  These are delicious and incredibly easy to make.

I believe zeppoles were created from leftover dough that someone fried up and coated in sugar since so many classic recipes are created from what is leftover, in-season, or lying around.

How to Make Zeppole

When researching zeppoles, recipes were all over the place.  From using eggs to vanilla, to even baking powder, it was hard to zoom in on what these would have originally looked like.

I can say though with confidence, this zeppole recipe is pretty close to the original.  It’s only 5 ingredients, plus the oil for frying, and it’s super easy to make.  In fact, the recipe reminds me a bit of this Homemade Pizza Dough Recipe. 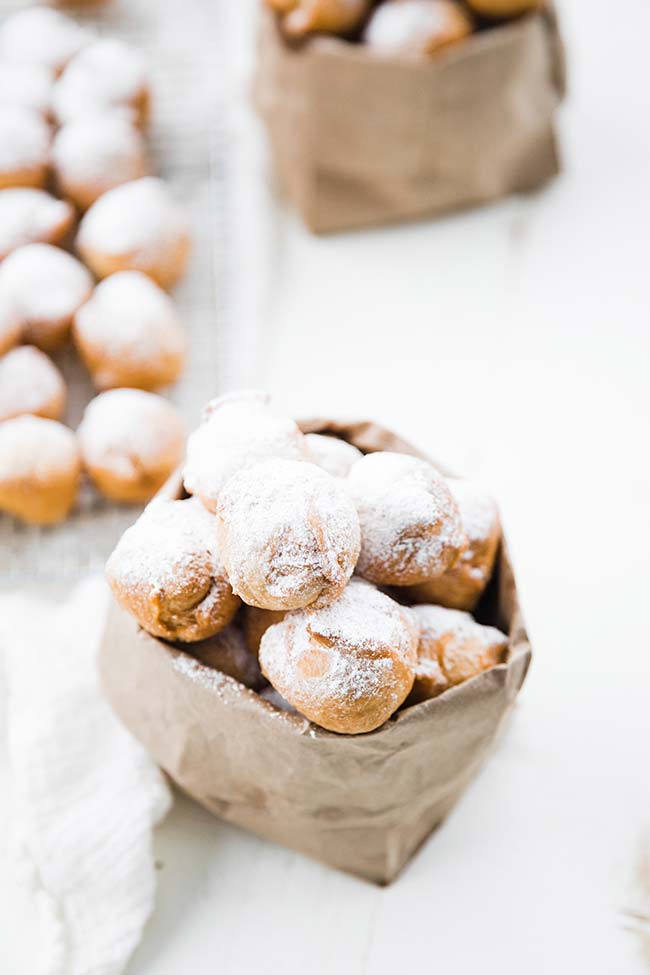 Is It the Same as a Beignet

The main difference between a beignet and a zeppole is the dough as well as the shape.  Zeppoles are a bit doughier than beignets and are a bit more firm.  They are also made by drop spooning them into oil where beignets have a very distinct square or rectangle shape.  Both are finished the same way with powdered sugar.

What Do You Serve Them With

Zeppoles are often eaten as a snack and can be eaten at breakfast, like a doughnut.  These in Italy would be traditionally served with espresso or strong coffee, which is how I like to enjoy them as well.

These are easy to make a treat that the whole family can enjoy! How to Reheat: The easiest way to warm up zeppoles would be in the microwave for 20 to 30 seconds but that may leave them with a weird texture.  I suggest putting them on a pan covered in foil and baking them at 350 degrees for 6-8 minutes or until warm.  Re-sprinkle them with powdered sugar.