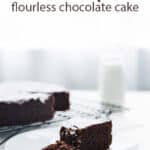 Torta Caprese Recipe is a delicious flourless cake loaded with chocolate and almonds for an unbelievably rich decadent dessert. If you’re a chocolate lover, then this Torta Caprese recipe is the ultimate dessert for you.  In addition, this cake is gluten-free so go ahead and take a huge slice!

Essentially a Torta Caprese is a flourless almond and chocolate cake.  As you know I’ve been on this tear to find the most authentic versions of recipes out there, and since I’ve made a ton of savory dishes, I figured it was time to make something sweet because I think the French Silk Pie was my last dessert.

While doing my research I learned that this classic cake really has an undocumented history.  No one can actually pinpoint when the torta Caprese was invented although they say it came from a baker in the 1920’s who lived on the island of Capri and ran out of flour or forget to put flour in it his chocolate cake came out with a torta Caprese. Not sure I’m buying that one but ok. Now, if I had to guess it probably did come from somewhere near the island of Capri because other names for this are a Capri cake or a Caprese cake.  Caprese, Capri, got it?

In addition to this theory, the almond is an absolute staple in both Italy and Sicily so I actually think this Torta Caprese was made with intention because it is way too good to have been created on a whim.  Now I’m not saying that this can’t happen, but to me, it seems unlikely.

It was interesting when researching this torta Caprese and the methodology that was most commonly used by folks that live in that area.  In America, we have some baking procedures where you put 1 thing in at a time until mixed or mixing dry separately from wet, etc.  The recipe procedures were very interesting to me and after making it, I completely get why they did it the way they did.

In any recipe quality ingredients are essential, so when I saw this Torta Caprese recipe called for Bob’s Red Mill, I immediately knew I would use their Super Fine Almond Flour. Everything of Bob’s is incredibly high in quality and always perfect in the flavor department, so in order to do my ancestors from Italy justice, Bob’s is on the list to make that happen!

The procedures for this were so interesting and are as followed:

As you can see there is a bit going on with a recipe that has such few ingredients.

That alone made me wonder what was up with this Torta Caprese recipe, but you see this cake could most likely fall pretty easily while baking so keeping cool and folding in a lot of the ingredients would be key to not over mixing and keeping it more on the cool side. Honestly, it made me think that I could apply this torta Caprese recipe process to other cake recipes to help keep it from falling.