This delicious New England Clam Chowder recipe is jam-packed with vegetables and fresh steam clams for the most amazing soup ever!

I am back, and in my fanciest Boston fishmonger shellfish digging outfit fully equipped with hipster sweater, denim apron, and of course a beanie for my dome to whip up this New England clam chowder!

Of course, if I’m going to play the part I’ve gotta dress the part right?  In the words of famous coach, Lout Holtz, “When you look good you feel good, and when you feel good you play well.” 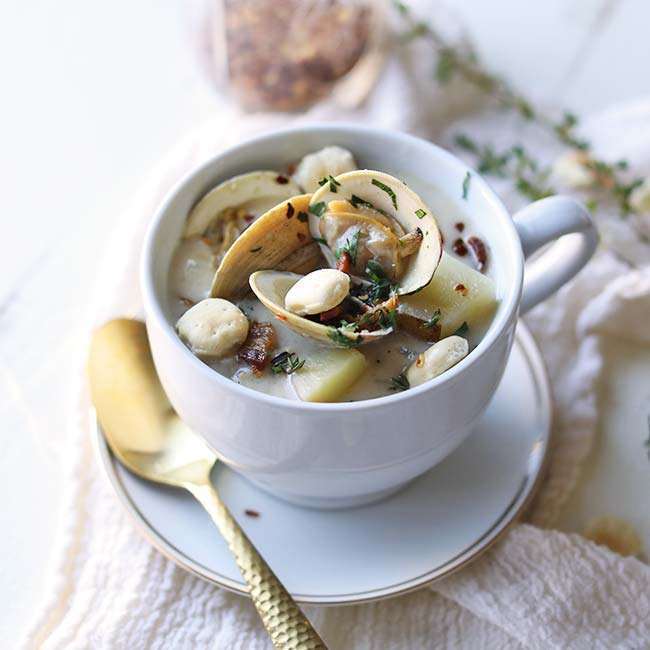 Not only was it fashionable it was also incredibly functional making this because outta nowhere winter has most recently smacked us here in Chicago as it’s gone from 75° to 35°.

There is literally no fall, no spring, only summer or winter.  However, I have heard it said by locals that there are 4 seasons here in Chicago: summer, winter, construction, and traffic…  Yeah NOT funny to the outsiders lemme tell you.  So, as I was saying now that I’m nice and toasty on this cold day, it’s time to bust out a way oversized pot of this soup.

What is New England Clam Chowder

Ok wait, one more…  Name this movie! “New England Clam Chowder… Is that the white or the red?

No, it’s not from Greatest Catch, it’s from Ace Ventura Pet Detective when Jim Carrey was trying to meet up with his buddy who set up shop in an underground room at a heavy metal club. I only tell you all of this because New England is white and the folks down south in Manhattan make the red chowder, just in case there were any hang-ups.  Both chowders are actually made pretty similarly except in the red there is no cream, and there is an addition of tomatoes.

I think both are delicious but if I had to choose I’d go with the white because it’s soup so it’s hot and meant to eat in cooler weather, plus the cream makes it a bit heartier.

New England clam chowder starts with some bacon, so I went all-in with 1 pound of super thick-cut smoked bacon.

I know it seems like a lot but I literally made 2 gallons of soup – sorry I’m Italian and it’s in our blood to try and feed the neighborhood in addition to our families. How to Make the Roux

It’s important to make a roux at this point in the soup because this is what will thicken it up.  Roux is equal parts weight fat and flour and doing this makes it hard to gauge because I really have no clue how much 1 pound of rendered bacon fat weighs, but after it was said it done it ate up 1 ¼ cups of flour.

I’ve been doing this long enough that I know when a roux is good to go.  If for some crazy reason your soup does not get thick when it comes to a boil make a slurry, which is corn starch and water mixed together, and mix into your soup.

That is a total worst-case scenario but wanted to provide it just in case because you never know.

How to Finish the Soup

Once your roux is made, add in the cream sherry and then your stocks, clams, and herbs to the soup.  Bring this sucker to a boil to ensure it becomes nice and thick before adding the potatoes in and cream.  Season it up and then cook up the fresh steamed clams!

Making fresh steamed clams is actually really easy.  Add some olive oil to a pan and add your clams and saute for a few minutes.

Next, hit it with the wine, garlic, and thyme, and put a cap on it and boil the clams until they open.  That’s how you know they are done.

Finish it with butter, parsley, salt, and crushed red pepper flakes and serve’em up all over top of this recipe!

If you love this, then you’ll love these soup recipes!