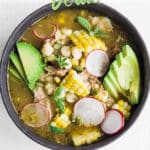 Verde Pork Pozole Recipe is a delicious soup with hominy and fresh corn.  This soup is verde-style with shredded pork and is absolutely delicious.  In addition, try making my other delicious recipes for Grilled Thick Cut Pork Chops with Black Bean Corn Salsa or Maple Glazed Pork Chops with Bean Cassoulet. We are huge soup fans in our house and this pork pozole may be one of your favorites.  There is just something about this that is just unbelievable and will keep you coming back for seconds and thirds.  It’s loaded with chunks of vegetables, slow-roasted pork and has such an amazing broth.

If you’ve never heard of this, then let me just start by saying welcome to your new favorite soup!

What Is It Made Of

Pozole soup is a broth-based soup consisting of onions, hominy, and often times pork as the protein.  There are some variations with meat where either a beef shoulder or shank is used in addition to chicken.  There are also different broth types of pozole soup from verde, to rojo or to simply plain or stock flavored.

It’s is a very simple soup and can take as little as 30 minutes to put together and as much as 3 hours.  I personally like to take my time prepping everything, searing up the meat properly as well as roasting it correctly.  Just like any soup, it always tastes better the next day after it has time for all of the flavors to infuse.

Difference Between Pozole And Posole

There are variations in the way it is spelled and pronounced based on where you are in Latin America.  Pozole traditionally has pork, hominy, and broth, which is what this version is.  You may see posole as well, but rest assured it is the same.

By normal everyday standards in the United States, I would say pozole soup can be really healthy.  It is loaded with fresh vegetables, protein, and broth.  There is minimal oil for roasting used and if you wanted to go the extra mile, simply use no oil and trim the fat completely from the pork.

If you’re wondering what hominy is in this pork pozole recipe, don’t be alarmed because I get this question all of the time.  Hominy is simply dried corn or maize, that is reconstituted in a diluted lye solution, a.k.a lime juice.

I know, it sounds kind of crazy right?  I can assure you it’s totally normal.  The solution helps the hominy soften up by loosening up the hulls from kernels.  Just like anything though, drain it and rinse it before putting it into the soup. 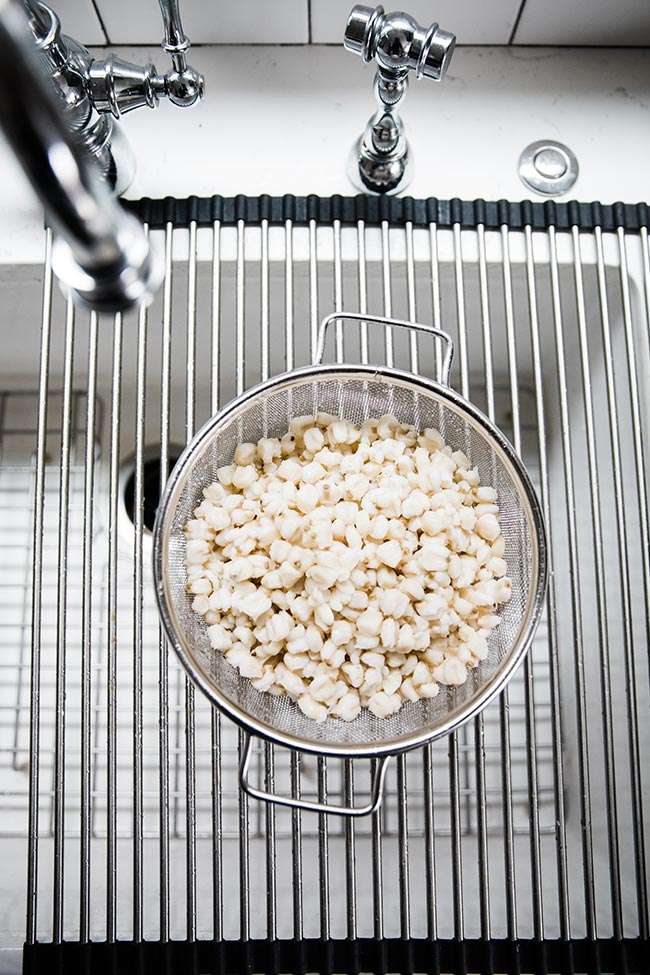 How to Make Pork Pozole

Here’s how easy it is to make pork pozole verde:

2. Puree the peppers and tomatillos with some herbs and spices in a blender.

3. Brown a pork shoulder in a large pot.  If the pork shoulder is too big simply cut it in half and do it in batches.  The pork will shrink up as it roasts.

4. Saute some onions and garlic until browned in olive oil and add to the pork pot.

5. Pour the pureed serrano and tomatillo mixture over top along with some stock and simmer. What Does It Go Well With

Pozole soup becomes even more delicious in flavor when toppings are added to it.  Here are some of the optional and traditional toppings:

You could also add things such as cabbage, onions, tortilla chips or tostadas.

How to Make It in a Slow Cooker

While I didn’t make this recipe in a slow cooker it is definitely crock-pot friendly, so please feel free to cook it up in there.

If you have a saute function on the crockpot, I would recommend searing the pork first before adding in all of the ingredients.

Traditionally pozole soup uses pork but lets me tell you that I’ve made chicken pozole quite a few times and it is every bit as fantastic this one.  The process to make a chicken version is very similar to that of a pork pozole but obviously chicken cooks and breaks down much faster so the cooking time will obviously quicker as well.

This is one of the reasons I like chicken pozole, however, if you’ve been following me for quite a while then you know I’m a bit of a traditionalist so pork it is for me, most of the time anyway. How to Reheat: To reheat it, simply place the desired amount back into a saucepot and cook over low heat until warm.  Alternatively, you can place a small amount in a bowl and heat in a microwave until hot.

If you love this pork recipe then you will love these soup recipes!