This delicious Korean-style short ribs recipe known as Kalbi is marinated overnight in a tasty sweet fruit marinade and grilled to perfection for an amazing sweet tender taste.

I am a sucker for ribs, especially my braised beef short ribs, but I’m not sure there is a ribs recipe I love more than Kalbi.  It translates from Korean to English as “rib.”  Kalbi is said to have been created in the 1700s where a Korean king allowed for the banned butchering of a cow to help feed a large mass of people who were helping construct an important structure.  The ribs were thrown into a soup and then later someone suggested that they should be roasted. Over time the roasted short ribs were added to a marinade and then made into what we know them as today.  If you love Korean BBQ, then you get to bring your favorite joint right to your kitchen in this amazing recipe.

Kalbi beef is a special cross-cut short rib where the rib is cut longways using a band saw making it a thin cut of meat.  The cut bones are exposed along the bottom and if you were to line up the beef together you would easily recognize that it comes from the short rib. As you may have read, kalbi is often referred to in America as Korean short ribs which make up the specific way the short ribs are cut as well as the traditional marinade that is in the recipe.

The Kalbi Korean short rib marinade is really delicious and loaded with flavor.  I have a few Korean friends and they helped me elevate my current recipe to the next level with a few new ingredients that are incredibly traditional.  In addition, they mentioned making the marinade in the blender which will help incorporate the ingredients more efficiently.

You can also add in 1 teaspoon of salt and 2 tablespoons of regular sugar to make the marinade more intense in flavor.  The 2 ingredients that go into the marinade that I had never heard of were the Fuji apple and kiwi.  They help to flavor the ribs as well as tenderize with the added acid that they provide.

How to Make Kalbi 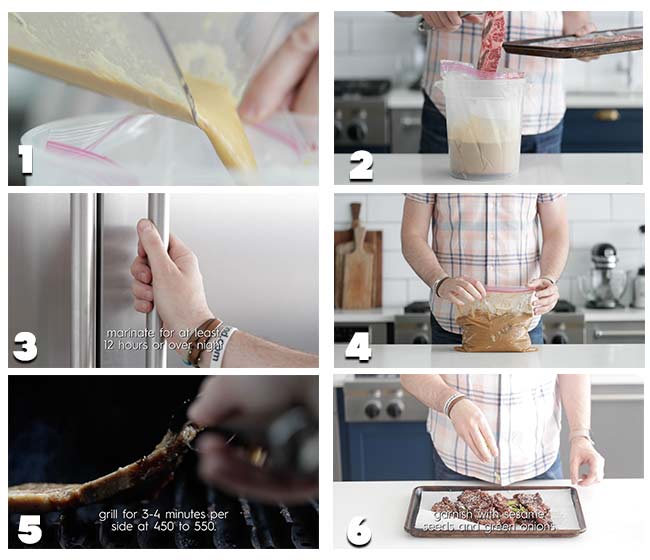 My friends, I can promise you that these Kalbi Korean short ribs are an absolute family favorite and they will be yours as well.  Remember, you can make anything in a restaurant at home because homemade food from scratch just tastes better and it is always guaranteed to bring more smiles and happiness to your life and table! 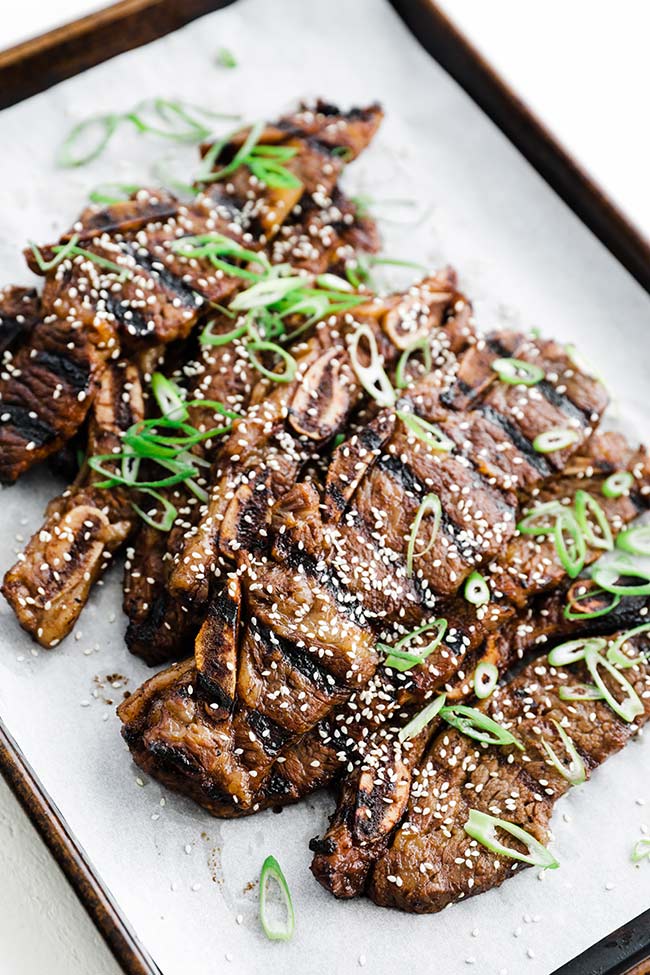 How to Reheat: To reheat the kalbi simply place back on a hot grill for just a few minutes per side to heat up.

How to Store: Store these ribs covered in the refrigerator for up to 4 days.  The ribs will actually freeze well covered for up to 3 months.  See the reheating instructions above.

You can also add 1 teaspoon of salt and 2 tablespoons of regular sugar to the marinade to make it more intense in flavor.

Don’t marinate them for more than 24 hours. Chef Notes: • You can also add in 1 teaspoon of salt and 2 tablespoons of regular sugar to make the marinade more intense in flavor. • The marinade will last up to 4 days if you choose not to marinate the short ribs right away. • I like to move the marinated ribs around in the bag every 4-6 hours to make sure they are getting exposed to the marinade. • Don’t marinate the ribs for more than 24 hours.