This Creamy Shrimp and Grits Recipe is delicious and as classic as it gets.  The shrimp are simmered in a cream sherry cream sauce while the grits are loaded with white cheddar for an unbelievable combination of flavors. It’s been years since I’ve made this recipe and I’ve been recently chomping at the bit for the opportunity to make it again.

This creamy shrimp and grits recipe is absolutely delicious, super easy to make and one of those perfect recipes where you can feed the masses, well because there are so many dang grits!

Too many leftover grits is a good thing, trust me :-).

Just like I stated in the video, no self-respecting southerner makes instant grits, and neither are we.

Now, that doesn’t mean we are cooking these cheddar grits for 2 hours, but you can expect to be stirring for about 10 minutes or so which really isn’t that bad, see risotto!

It’s also important to make the cheddar grits recipe first because it can hold really well over low heat for long periods of time, the shrimp cannot and really needs to be eaten asap.

Nothing worse than mushy overcooked shrimp, NOTHING!!  So, in other words, don’t ruin this creamy shrimp and grits recipe! 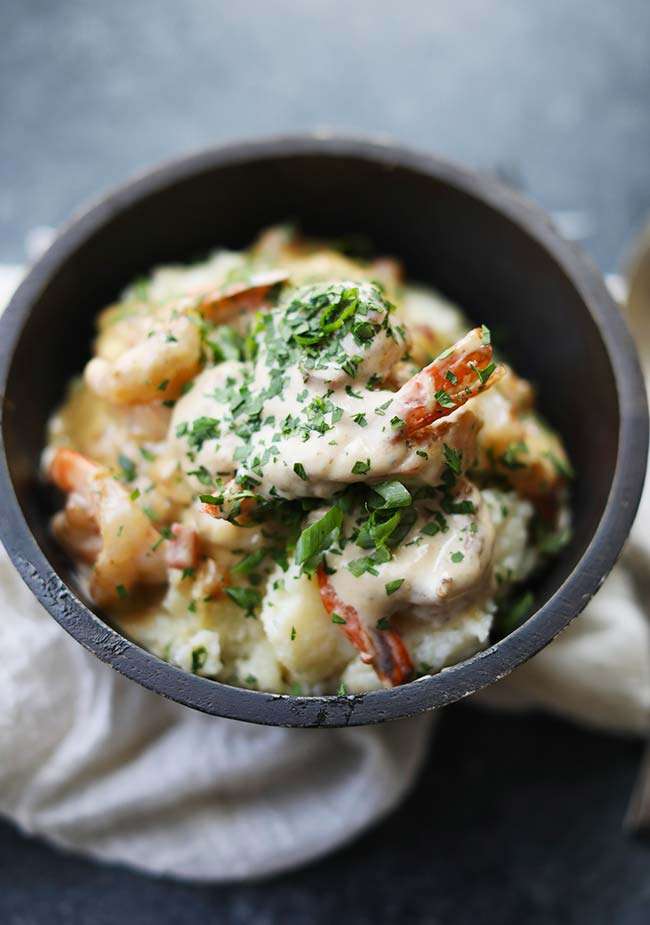 Grits are delicious and work well for things like porridge or polenta, another huge fav in my house!

How to Make White Cheddar Grits

To cook cheddar grits it’s as simple as bringing your liquid, in this case, I used chicken stock but you can absolutely use vegetable stock or even water, to a boil.  Sounds a lot like making polenta right?

Once you are rolling you then pour in your grits and stir.

This is similar to risotto but doesn’t worry your arm won’t fall off stirring grits as it will with risotto because it takes about 10 to 15 minutes of stirring and then you can kind of leave it alone over really low heat to carry the rest of the way.

The importance of stirring the cheddar grits at the beginning is so that it doesn’t clump up! Once the grits are at al dente, or slightly crunchy, you then finish it off with some unsalted butter, shredded aged white cheddar cheese, sea salt, white pepper and a few dashes of hot sauce.

You use white pepper in the food you want to keep white because if you used cracked black pepper then you would see it and it would take away from the beauty that is your white corn grits recipe.

Now at this point just simply put the top on it and let it sit over very low heat until you’re ready to serve the cheddar grits up.

If for some reason you won’t be eating it for a while then I recommend reconstituting it with a little water or stock to sort of cream it up a bit as it will have a tendency to clump back together if you let it sit for too long.

Just a little FYI there, that’s all!

We are one step closer to finishing up this creamy shrimp and grits recipe!

How to Make the Shrimp

You first start off by rendering some pancetta or bacon in a large saute pan over medium heat.

Once those little fellas turn nice and crispy remove them from the heat.

Next, simply add in the shrimp and cook them just for a few minutes and remember we don’t want to cook these all the way through because they will continue to cook when they are in the hot cream sauce, which is coming up next! Remove the shrimp and then deglaze your pan with some cream sherry.

This stuff is seriously liquid gold and you will probably want to use it in all of your cooking because of its’ just that good!

Reduce the liquid by half and then add in your heavy whipping cream and cook it down until it becomes super thick, like alfredo sauce.

Oh yeah, cook the cream over lower heat so that it does not burn, yuck!

Finish by adding back in the shrimp, crispy pancetta, salt, and pepper and serve this tasty creamy shrimp over some white cheddar corn grits and you are good to go!

Garnish with some parsley and green onions and BOOM, let’s eat these creamy shrimp and grits!!

Here’s a list of some of my favorite shrimp recipes. Share
Print
5 from 3 votes
This Creamy Shrimp and Grits Recipe is absolutely delicious, super easy to make and one of those perfect recipes where you can feed the masses.
Servings: 8
Prep Time: 10 minutes
Cook Time: 40 minutes
Total Time: 50 minutes

Note: There will be plenty of grits leftover, just an FYI.