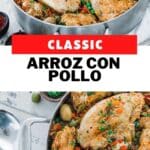 If you are looking for a great weeknight meal that is booming with flavor, then this authentic arroz con pollo recipe is exactly what you need to make! 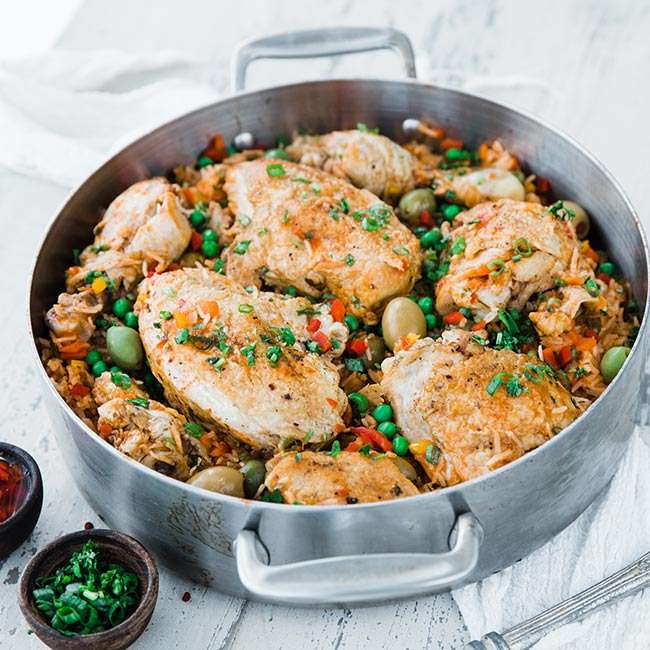 So, I was struggling a little bit trying to figure out what I was going to make this week for my video, so I posed the question to my Facebook followers and they did not disappoint.  However, once I read arroz con pollo from a guy named Larry, I knew that this was exactly what I was going to make.  When I learned I would make this I literally repeated it 2,509,032 times and my wife almost killed me.

When you can roll your R’s man is it a fun word to say.  I always think of Jon Leguizamo in the movie Chef where they pull up to South Beach in Miami and he’s on the bull horn saying, “If we can pronounce we can make it, Arroz con Pollo!”  Love saying it, love making it, heck I even like looking at it because it is absolutely delicious! Arroz con pollo translates from Spanish to English as rice with chicken.  It is a simple dish consisting of braised or boiled chicken that is mixed in with long-grain white rice, sofrito, and spices.  It is really easy to make and in fact, if you want to do this thing even easier then how I did it, it can absolutely be done.

I mean you can buy sofrito in a jar, the spices come as a blend from Goya, and you can buy pre-made chicken stock as well as prefabricated chicken. You can be in and out with this arroz con pollo in under an hour from start to finish.  That is pretty quick for a meal so tasty!

There are really 2 countries that claim the origin of this recipe with Puerto Rico being one of them.  Puerto Rican Arroz con Pollo uses annatto seeds from the achiote tree that are super hard in texture but are subtle and slightly sweet in flavor.  You can grind’em down, which is really hard to do, or just add them into the oil you are cooking with for color and then discard them.

The other difference with the Puerto Rican version is that they use beer when cooking the chicken.  I didn’t do that for this recipe because I wanted to feed it to my family and they won’t be big on the beer flavor. The other country claiming the birth of this classic recipe in Spain.  The Spanish version uses saffron in place of the annatto seeds.  Saffron provides some great yellowish color plus great flavor as well.  My only issue is that saffron is expensive and annatto is not so you know where I went.  With all this being said I am going to guess that the origin is from Spain, shhh don’t tell my Puerto Rican friends!

Since this is so popular throughout all of Latin America I am going to guess that there are a few others that are super good which I am missing.  in the end, it’s super flavorful and one of those amazing traditional recipes, which I am all about.  I really think you should make this, it is amazing and a great meal to graze on all day and night.

If you love this, then you will love these chicken recipes!