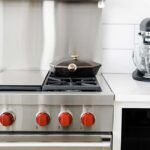 It’s been a year… I’m sure most of you all feel similar.  A few ups and a whole lot of downs.  During the pandemic in late summer 2020, we decided to pick up and move out of the city of Chicago.  Truth be told I’ve been wanting to leave Chicago for quite some time as I was craving that small-town feel I grew up while in St. Louis 25 years ago.  Well, I found it in Northwest Indiana in a little town called Crown Point and it’s been nothing short of amazing.

Not only did I have to move my family, but I also had to sell my studio in Chicago and start over from scratch here in CP.  I was pushed back into the house kitchen for the last year and although I did a good job of hiding it, I was miserable.  The lighting was bad, there isn’t a whole lot of room to move my video production equipment around, and the appliances left much to be desired.  I was clawing at my face the last few months in that kitchen until the new place was finished up. After 14 months, an insane lumber cost increase, labor shortages, and a boatload of other obstacles, BPMVC studio’s part 2 are up and running and I couldn’t be happier, and I can’t wait to show you everything.

Starting with a clean slate I really wanted to make sure I got the new kitchen right because after all, this is probably the last stop until whenever it is I’m done doing this gig.  When I was doing my research, I was looking at pictures of professional kitchens and no matter if I was looking at images from the 1950s or 2020, one thing kept ringing true.  They all had a ton of stainless steel and subway tile.  It’s timeless and it always looks good.

As you can see this kitchen is very heavy on stainless, subway tile, and some walnut butcherblock wood (including the floating shelves over the sink).  It’s 100% smaller than my studio in Chicago, but dang am I in love with this space.

It’s hard enough to get a microwave much less some major kitchen appliances during this unprecedented time.  I ordered everything 10 months ago just to make sure it would be available once the space was completed.  The space is decked out in Subzero/Wolf and Cove, which is what we had in our old Chicago house.  It works well, I can beat it up a bit, and it’s beautiful.  Yeah, the red handles always get me.

I wheel around heavy video equipment and I was always running into my kitchen island, so to do away with that I went with two 5 feet long restaurant prep tables.  One is stainless steel and the other is a butcher block which is perfect for making doughs, pasta, and bread. 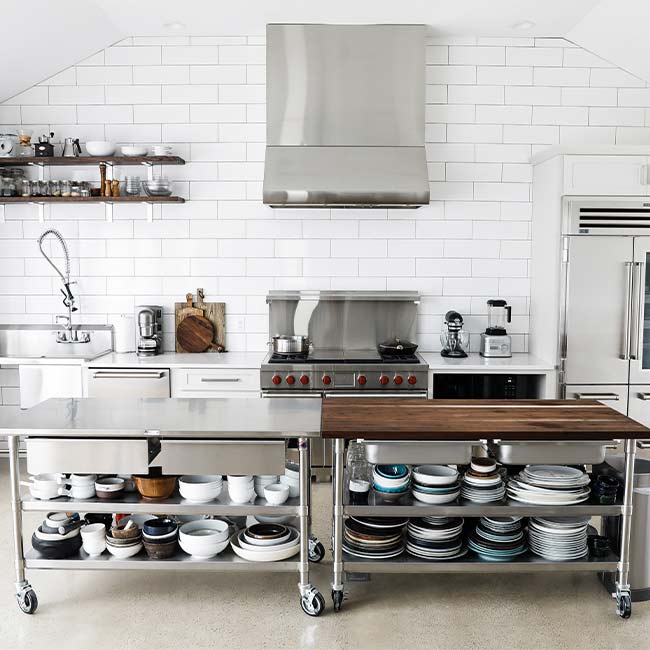 Since I don’t have the space, I used to, storage is prime real estate so I had to get a little crafty when it came to shelving and where I would put all my plates, ramekins, and food styling tools.  Each table is equipped with two drawers and two large lower shelves which are jam-packed with everything.  Yeah, I’ve got a lot of junk.

I’m beyond thrilled with how everything turned out and geez do I owe you all a huge thank you.  I have such admiration and gratitude for each one of you that has helped grow all these social media channels and this website to where it is today.  Simply put, I am not here if it isn’t for you, and I thank you.

Making more videos and recipes in this new space is just the beginning as I’ll look to really start pounding on this cookbook and dream up other ways to teach fundamental cooking basics to you all while also being more in touch with you all.  Thank you.