People often ask me what my favorite food is and much to their surprise I always say, “pizza.”  I think because they know I’m a chef that I would be saying things like foie gras, or duck, or something a typical foodie would like.  I’m actually pretty simple and easy to please when it comes to eating food rather than cooking it.  I mean I touch, smell and look at food all day, and often times at the end of the day I don’t want what I just cooked.  I had this same issue while I was in the restaurant industry as well.  I had anything I wanted to make myself at my disposal any time of the day, but I really wanted was Del Taco on the way home after my shift.  I’m guessing that’s why I was 6 feet 2 inches and about a buck 35 soaking wet back then.  While I appreciate very much cooking fine dining cuisine I am a huge sucker for pizza. I used to travel quite a bit and no matter where I went, whether small town or big city, I was always on the hunt for the best pizza around.  Believe it or not the best pizza I’ve ever had is still back in Columbia, Missouri where I went to school.  I know you are going to tell me I’m crazy and that some insane place in New York is the best or Pizzeria Bianco out in Phoenix is the best, but I’m telling you that to me the best pizza I’ve ever had is in the middle of nowhere Missouri.  So now that I’ve found the best pizza in the country I’m now trying to figure out how to make the best pizza right in my very own kitchen, and believe it’s not easy.  I’ve made quite a few pizza recipes on my site, but I’m still not sure if I’m there yet.  With all that being said, this homemade pizza recipe with rye crust is DANG close to being one of the best I’ve had. If you’ve ever worked with rye flour you’ll know that it’s dang near impossible to get it to rise when baking with it, so it’s important to only use a bit of it.  Because you will only use a few tablespoons of rye flour it’s important to cut it with an ap flour.  One of my favorite flours is all-purpose flour.  It’s ridiculously versatile and be used for just about all of your baking needs, not-too-mention it’s 100% organic!  I used 5 cups of ap flour to 5 tablespoons of rye flour.  Figure 1 tablespoon of rye for every 1 cup of ap flour when it comes to making a pizza crust.  You can absolutely add more rye flour in, but just know that it is going to take that much longer to rise.  When baking anything with rye flour you must give yourself time to allow the dough to rise, most likely overnight.  The best apart about this recipe is that you don’t have to work it, just simply mix until combined. 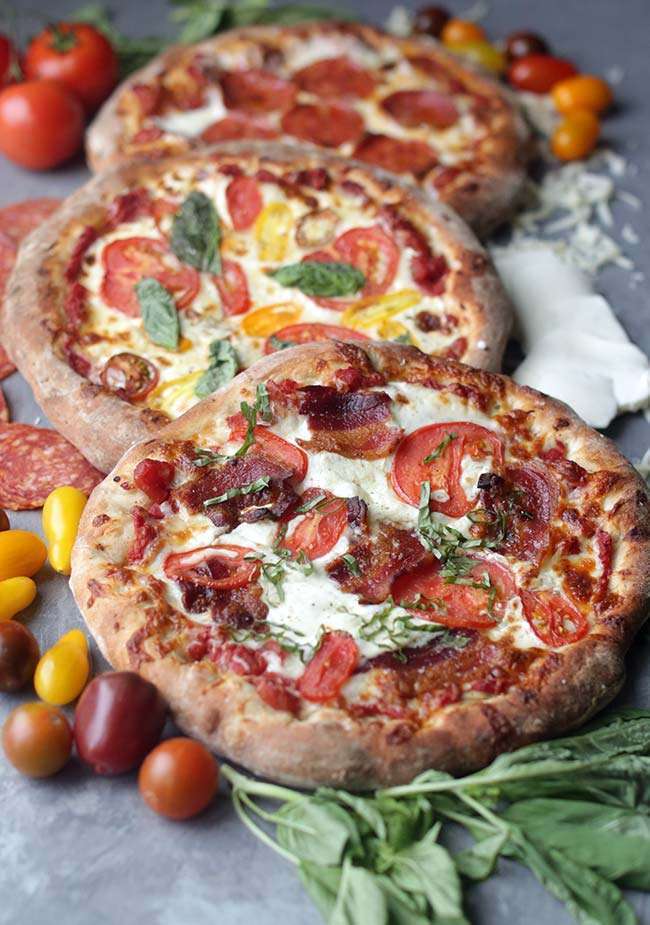 I’m trying to get out of the habit of using a ton of yeast in my baking because I often feel that it tastes too strong in some of the things I bake.  I’ve been using about a ¼ of what I normally use and allow for more time to let it rise instead of forcing it by using more yeast.  I only used about a ½ teaspoon in this homemade pizza recipe but I let the dough rise for 12 hours.  I know, I know that’s a long time but the crust was one of the best I’ve ever made or had.  It was so chewy and fluffy and flavorful that it was literally the hero of the pizza instead of the toppings.  Like I said earlier I know I’m close to making the best pizza I’ve ever had but I think it will still take a bit more testing and tuning to get it right, but at least I’ve got somewhere to start that has a solid base. Toppings to pizza are always up to the baker and what they feel like making.  Like I said I make a ton of pizzas every year at home and it’s always fun to change things up.  I went with a traditional pepperoni, a spicy pepper jack and bacon, and then a simple margherita.  One of the things that I also changed up this time around was the sauce.  Instead of using a ton of tomato paste in a smooth sauce I decided to keep it chunky with no liquid and let it cook down a bit and man was it so good.  I often try to complicate things by putting in more ingredients and almost always realized I can keep it simple while being even more delicious.  Well if you’ve got the time, then I’ve got the pizza recipe starting with these Three Different Homemade Pizza Recipes with Rye Crust!  Happy Cooking!