This Texas Style Chili with Slow Cooked Brisket is the ultimate recipe to show off to your friends and family. It is quite simply the best! The number one most google searched food item in the month of February is Chili, so I made sure this Texas Style Chili with Slow Cooked Brisket recipe was on point! I am guessing it’s because of the Super Bowl, and if you are looking for a recipe then this slow cooked brisket Chili is exactly what you should make.

Not chicken wings, potato skins, or any other thing that you love to make and eat for the big game, chili is the winner. I love brisket chili for the simple fact that to me it means FOOTBALL.

Yes, I’m obsessed I get it but hey we all have our TV watching struggles lol.

WHAT IS TEXAS CHILI?

Yes, I know most Texas Style Chili recipes do not have beans in it, look I get it. However, my inspiration for calling this a “Texas Style Chili” was because I finished it with chocolate and cinnamon and brisket which quite a few Texans do. And no offense, but I love beans in my chili, it’s a must and well it’s my recipe so I get to do what I want :-).

YES I KNOW TEXAS CHILI IS BEAN-LESS BUT I DON’T CARE. For some reason brisket chili is just one of those things that is hard too perfect. I mean there are so many different ingredients, from the beans, to the meat, the correct amount of seasonings and spices, too many things to get right!

I also like the fact that this brisket chili can be so versatile with all of the different ingredients you can put in it.  Heck I just made a vegan chili with sweet potato and kale and it was so good.  Who knew??

I also like the fact that you can pick and choose your spicy peppers for the perfect amount of heat.  Guess what if you don’t like the fact that I used jalapeños in my Texas Style Chili with Slow Cooked Brisket and want something hotter, then go get yourself a habanero pepper, just don’t come crying to me when your mouth is on fire.  It’s all about balance, remember that.

HOW TO MAKE SLOW COOKER BRISKET

When you take the time to caramelize your vegetables it literally takes on a completely different flavor and is just so delicious. I mean think about it, a raw onion or a sweet caramelized onion?!  Exactly what I thought!

If you’ve ever smoked brisket, then you know firsthand just how long it takes to cook. 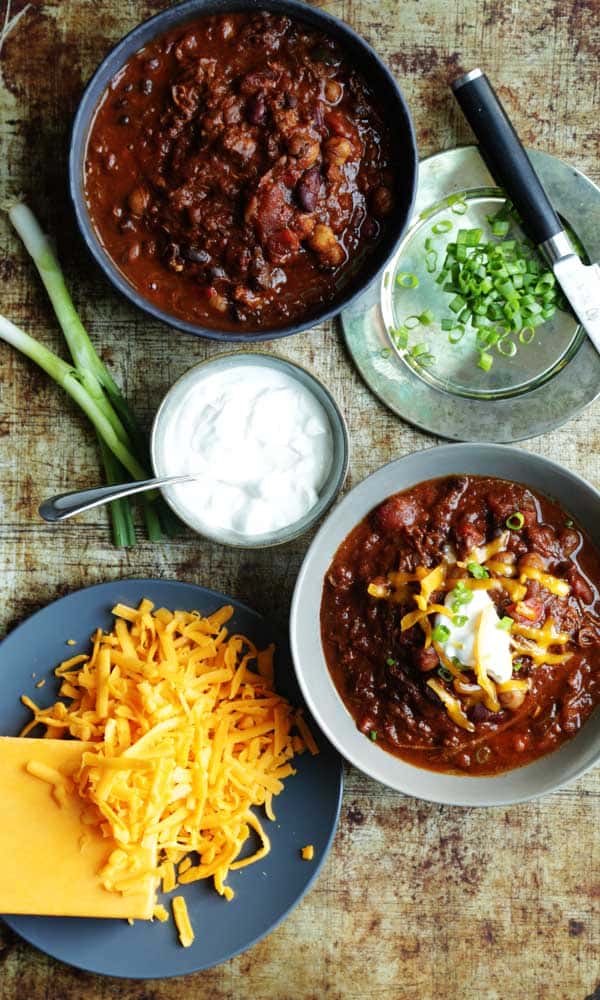 I mean honestly it takes like 18+ hours to smoke a brisket and for it to be done correctly, so it is definitely a labor of love.  Well thank the good Lord for slow cookers because we don’t have to worry about cooking the brisket for that long, however it does still take about 8 hours, which is quite a bit of time.

I also like to start by searing the brisket first to get a nice crust on it before I add it to the slower cooker with the beer to be broken down.  Something just weird about putting raw protein and letting a slow cooker cook it.  I’m odd I know.

So essentially you are cooking the chili without the slow cooker brisket to allow for caramelization with out the breaking down of the vegetables.  In the end you simply combine everything and simmer.  Easy as that!

If you think you have a better recipe I want to see it, so send it my way in the comments below or on social media.  Enjoy!

HOW TO MAKE BRISKET CHILI

If you love this Texas Style Chili with Slow Cooker Brisket, then you will love some of these other chili recipes!